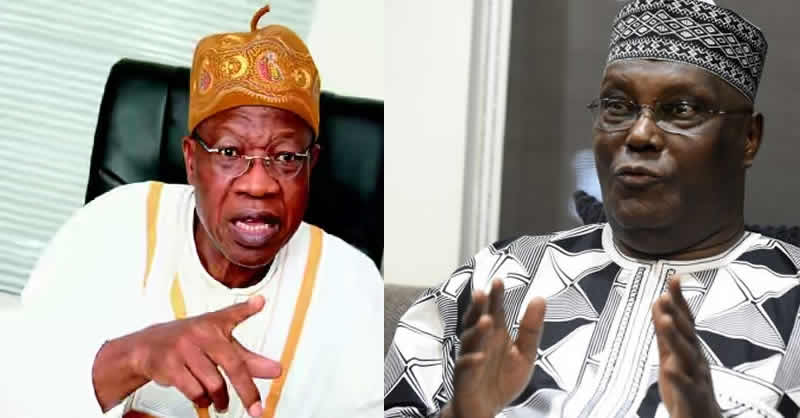 The Peoples Democratic Party presidential candidate, Atiku Abubakar, on Thursday, tackled the Minister of Information and Communication, Lai Mohammed, over his (minister) claim that the former vice president plagiarised the economic blueprint of the President, Major General Muhammadu Buhari (retd.).

The LENTORLITENEWS reports that Mohammed while speaking during a press conference in Abuja alleged that the economic blueprint laid out by Atiku was copied.

The minister said the former Vice President’s blueprint was a “crude attempt” at copying the Buhari-led administration.

He said, “Last week, the Presidential Candidate of the main opposition People’s Democratic Party former Vice President Atiku Abubakar, spoke on his economic blueprint at an event in Lagos.

“Let me say straight away, that the so-called blueprint is a crude attempt at copying all that the administration of President Muhammadu Buhari has done, especially in the areas of job creation, infrastructure, financing, relationship with the private sector, poverty reduction, debt management and the overall management of the economy/.”

But reacting to the allegation on Thursday, the PDP presidential campaign team in a statement made available to The LENTORLITENEWS, described Mohammed’s claim as an attempt to “turn truth on its head”.

According to the campaign council, while the minister was making a barren attempt to catalogue perceived achievements of the current APC administration, he did the unbelievable by claiming that the policy documents and proposals espoused by Atiku are the version of the economic blueprint of the APC.

The statement read, “That is a tsunami of a lie! To begin with, it has been openly acknowledged that this current administration came into power without a single sheet of paper of what could be called a policy document. Nigerians are aware that in both 2015 and 2019, it took the APC six months and three months, respectively to constitute a cabinet. Perhaps the Minister might be interested in telling Nigerians if it is also part of the APC manifesto to foot drag in forming a government.

“It is on record that the first economic recession that the country experienced in 2016, which happens to be our worst economic decline in thirty years, happened primarily because the APC administration applied what can be called a catch-up strategy to the early signals of the recession.

“That is why to this day, Nigerians are more agreeable to the fact that the tenure of the APC has been nothing but a sheer waste of time, all thanks to the catch-up economic strategy of the ruling party that has left the people more malnourished, sick and disillusioned.

“The poor records of the APC in the areas of economic management, jobs creation, education, security and in virtually all spheres of our national life is the reason why there is a lot of anxiety about the 2023 general election. Indeed, it needs to be stressed that next year’s election will be a referendum on the APC and it is not in doubt that the ruling party in Nigeria will present a global case study of how a political party can lose popular goodwill within a short period of time.

“Nigerians of all hues, both the rich and those that are not; the educated and those who are not; the elderly and the young are all witnesses to the scandal that the APC has become in the art of governance. Nigerians are rallied in their frustration with the APC and the promise of a better future that our presidential candidate, Atiku Abubakar holds for the country after his victory in the 2023 presidential election.

“What Minister Lai Mohammed reeled out as achievements of the APC is a compilation of the reasons why Nigerians have roundly rejected the ruling party. It’s nothing but a testimonial of failures. Conversely, what His Excellency Atiku Abubakar presented to the organised private sector in Lagos State last week represents the hopes of a new beginning, which Nigerians eagerly anticipate.

“Trying to associate the Atiku policy plans with the failed policies of the APC is the comical height of Minister Lai Mohammed’s aversion for the truth.

“It is contempt not just against the PDP and our presidential candidate, but also to the whole nation. Lai Mohammed must apologize to Nigerians for such an insensitive onslaught against truth in broad daylight.”