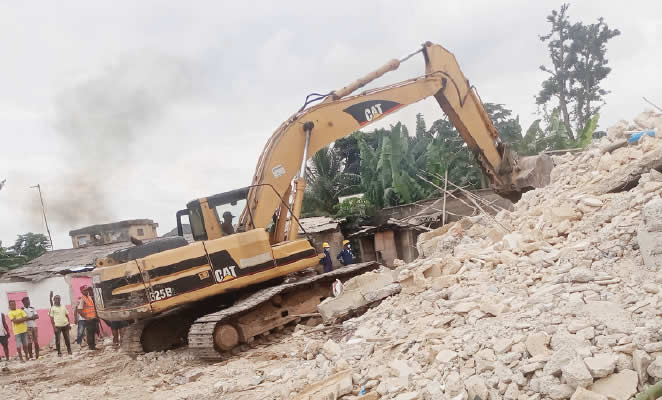 Two persons have been confirmed dead while three others hospitalised after a four-storey building collapsed in Uyo, Akwa Ibom State on Saturday.

The Zonal Coordinator of the National Emergency Management Agency, South- South, Godwin Tepikor, confirmed the development as he clamoured for enforcement of building codes in the state.

LENTORLITENEWS Metro had reported that the four-storey building which is under construction, located at Iman Street, off Aka road, Uyo, collapsed and the rubble trapped construction workers.

The state Deputy Governor, Moses Ekpo, who led other government functionaries including the state Commissioner of Police, Olatoye Durusinmi, said he was at the scene to gather first hand information of the situation and to sympathise with those who lost their loved ones in the sad incident.

While fielding questions from newsmen on Sunday, Ekpo said the government would set up an inquiry to ascertain the circumstances surrounding the collapse, adding that anyone found guilty would be sanctioned.

He said, “I came here first and foremost to sympathise with the families of those who lost their loved ones and since I came, the question I have been asking is where are their relations?

“We must also investigate why and how it happened to ascertain the personalities that are involved. It is after the enquiry that the state government would know what to do, but like I said earlier, whoever violates the building regulations, the law must take its course.”

Tepikor, in a follow-up reaction, said the injured victims, rescued by emergency responders who stormed the incident scene, had been receiving treatment in hospital.

He said “I was informed about this incident around 7pm yesterday on Saturday and I quickly mobilised relevant stakeholders including the Federal Road Safety Corps, the Civic Defence, the fire service and the Red Cross.

“I advised that they should contact any construction company to mobilise their excavator because what we needed was to rescue people alive.

“So, that commenced yesterday up till now and that is what is still going on. So, we have recovered one dead body here and the other died in the hospital because of multiple injuries.”

Tepikor said it was possible that the developer of the collapsed building got approval but the terms of the approval were not followed.