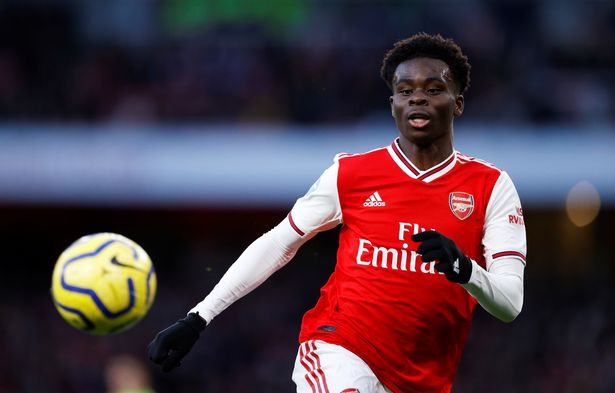 Bukayo Saka looked visibly shocked as he was handed the England Player of the Year award on Friday.

The Arsenal star, who edged England captain and runner-up Harry Kane and third-place finisher Declan Rice to the gong, was recognised as England’s standout performer over the last 12 months by voters.

Daily Mail reports that Saka, 21, made nine international appearances this season for the Three Lions and chalked up three goals, putting in a man-of-the-match performance during England’s 4-0 victory against Andorra on his birthday last September.

After a year, the Gunners winger has been offered the perfect vote of confidence from fans as England get ready to take on Italy in the Nations League, Friday night.

Reacting, Saka said in disbelief, “No way! I did not expect this, honestly. I’m honoured.”

“I’m so happy, I can’t put into words how happy I am. It’s really nice to be awarded this trophy, and that’s all I can really say!

“Playing for England is so special, there are so many kids who want to play football for teams and it’s really difficult, so to then get picked to play for your country, it’s another level of honour and pride in yourself.

“So I’m just really happy every time I get to come here, pull on the shirt and play at Wembley in front of all the fans.

“It’s a beautiful feeling,” the Daily Mail quoted him.