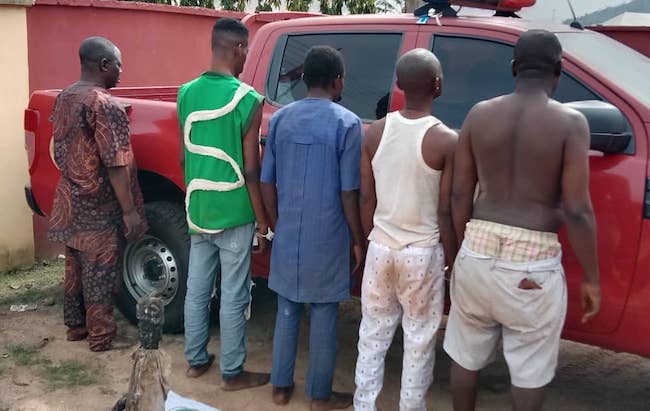 The Ekiti State Amotekun Corps has arrested five suspects in Ikere Ekiti in the Ikere Local Government Area of the state for allegedly defrauding a victim who is a resident of Abeokuta in Ogun State to the tune of N2.5million.

Komolafe, who spoke in Ado Ekiti while parading the suspects, said that the suspects were arrested in a shrine in Ikere Ekiti which they used to deceive innocent people and obtain them.

He said, “A colleague from Ogun State Amotekun Corps, put a call through to me that one of the people in Abeokuta was duped to a tune of about N2.5million, by a group of men in Ikere-Ekiti and they threatened to kill him.

“The five suspects were arrested in their shrine. We were able to destroy part of the shrines and we brought along part of those things they use in deceiving people.”

The victim, a 40 years old farmer, Udani James, who is from Benue State, but resides in Ogun State, said one of the fraudsters called him on phone and started by praying for him in the Christian faith”.

The victim said that at a time when the fraudster revealed that he was a herbalist, he told him that he was not interested again, adding, “That was how he started threatening to kill me and members of my family.”

He said that he had to come to meet the fraudster in Ado Ekiti, the Ekiti State capital, as agreed before the suspects were later arrested by men of Amotekun.

Komolafe said the suspects would be handed over to the police for further investigation and prosecution.