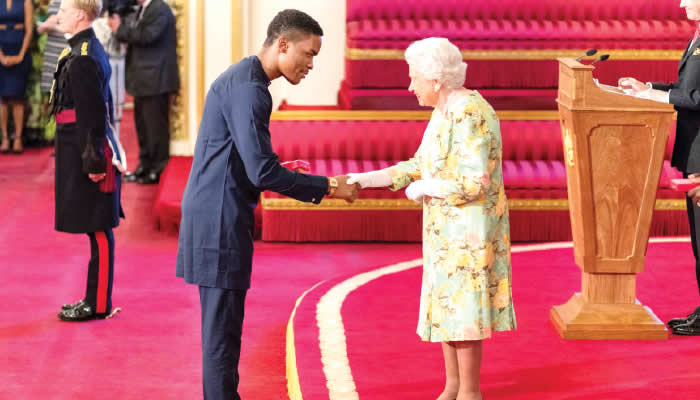 As the world mourns the passing of late Queen Elizabeth II, debates about her relevance and influence have sprung up.

The chronicles of Queen Elizabeth’s life and achievements in the form of documentaries and short interviews to commemorate her passing have also informed varying narratives and opinions. However, despite the convulsing emotions and accolades, the late monarch’s tentacles of power and authority have touched every part of the globe, especially in Africa.

One example is the Queen’s Young Leader Award, an annual recognition award for young persons or organisations who have shown exceptional leadership skills. The program, open to selected Commonwealth Nations, was established by the Queen Elizabeth Diamond Jubilee Trust in partnership with Comic Relief and the Royal Commonwealth society. Winning the award has as one of its perks the opportunity to meet with the Queen herself albeit for a few seconds.

Nigerians were not left out in the selection process: In 2015, global development expert and advocate in the health and finance space, Isaiah Owolabi, was bestowed the prestigious award.

Speaking on his encounter with Queen Elizabeth, Owolabi said It was a big opportunity in terms of networking, including training at Cambridge University.

He described their meeting as “a handshake. And it was more like a conversation in less than 10 seconds. And she asked me, how is Nigeria, and how are you?”

According to him, the aftermath of the event carved new paths, created opportunities, built trust among current and potential new partners, including the private sector and donor agencies, and increased access.

He said, “You know, access in terms of the quality of young people. So, for example, for all of the awardees, I am still very much in contact with them in a closed group that we still communicate with – though in recent times, what happened last week has even increased communication.

“Generally, it is still a very good reference point in terms of how it catalysed opportunities for growth and fork that we do in improving health and economic inclusion.”

For 35-year-old Independent Researcher on Environment/Agriculture for Development and QYL recipient 2015, Oladipupo Ajiroba, it was a rather fulfilling time being selected out of many to be celebrated.

He said, “I felt it was a privilege because I also realised there are so many people doing good things out there, but being singled out and being rewarded, I would say, was fulfilling.”

Ajiroba explained that his encounter with the Queen was “quite amazing, you know, she said thank you for all you do. Hearing that was just delightful; I would say, right? I was starstruck. Someone like her majesty commending me was a great feeling.”

He said the meeting with the late Queen had altered the public’s perception of him as a man of value and credibility.

“Sometimes, during the interviews, most of my questions revolve around that. Also, I have gotten speaking engagements at conferences and many other open doors.”

Isaac Ezerimi, who founded teens can code and got a QYL award in 2018 for his efforts, described his encounter as a once-in-a-lifetime opportunity that he was grateful to have experienced.

“It felt great to receive the prestigious Queen’s young leaders award from Her Majesty Queen Elizabeth. It was a validation of our work in Nigeria. It came when we wanted to scale our work.

“And that recognition did just that for us because it opened up many other opportunities. We were launched on a global stage literally with Her Majesty’s recognition, we’ve got lots of attention globally and for me as a founder, I got recognised on many other international platforms after that award at Buckingham Palace.”

Ezerimi recalled that the late Queen showed a high level of spontaneity and humour; he said, “So one thing that is so noticeable about her is that she is super intelligent and a very spontaneous person.”

Adding, “All of us came from different parts of the Commonwealth, young people drawn from different countries coming together, And for everyone she gave the award to, there were things she would say to you on the spot. These words didn’t sound like it was rehearsed. For instance, she could immediately tell what part of Nigeria I came from just by looking at my outfits and she was quite pleasant.”

The young Nigerian was full of admiration for the late Queen’s grace; he recalled that Queen Elizabeth didn’t seem to care about courtesy or their overall comportment. The awardees, he said, had a brief preparation on how to address the Queen but she didn’t care much about that because some of them made mistakes.

“You could see her humility too,” Ezerimi noted while expressing his gratitude for the opportunity to have been influenced by her recognition.

He said, “We probably would have just been operating at a very local stage, and nobody would know about us today. It put me in that position where people want to do something because they feel like if the Queen could recognise the work these guys are doing, it means they are doing something remarkable.  That translated to more work, more impact in our communities and securing partners funding for our work.”

Kennedy Ekezie, the founder of a fintech start-up, Kippa, concurred with Ezerimi. He described the meeting with the Queen in two words: life-altering and history-making.

“Meeting one of the highest serving monarchs and one of the most influential,” Ekezie said. “I call it the epic moment because I never imagined such an award would come or I would be in Buckingham Palace. Growing up, I read about this place and watched documentaries. Now looking back, going from Nigeria to London. I was staying in London, spending time in London, going to  Cambridge, getting a diploma, and meeting the Queen, her children, and the Prime Minister of the UK, David Cameron, at the time. It was an amazing moment for me.”

Since that meeting in 2018, Ekezie has risen rapidly in achieving major milestones and even met with the Nigerian Minister of Agriculture at the time, Sabo Nanono. He added that meeting the Queen was a sort of validation for his work.

He said, “In life, people care about your results, not your process… When I returned to Nigeria, there were a couple of press conferences. I got interviews, professionals from my department from the University of Ibadan and some other guys from the US invested in my work.”

But Ekezie wasn’t the only one who felt the award and the brief meeting with the Queen validated his work and efforts at adding value to the community. Nkechikwu Azinge, 28, a sickle cell advocate who founded the Sickle Cell Aid Foundation, said her meeting with the Queen was a mixture of many emotions, surreal and an endorsement flag for her.

Azinge said, “I felt overwhelmed. The first day they called, I remember telling me I had gotten the award. I was in shock. I was even more surprised when they capped it all by saying you will get the award from the Queen. Another thing was receiving the award in person. For me, it was a validation of our work at SCAF, a sickle cell foundation that raises awareness of the disorder and ensures the less privileged with sickle cell have quality healthcare.”

According to Azinge, prepping up to meet the late Queen was a different ball game as she practised her interaction with the monarch. She disclosed that despite all the training when she finally met Queen Elizabeth II, it was a moment filled with mumblings and a few trips and falls.

“I practised quite a bit, I felt confident, but when I had to walk towards her, I trembled and missed my step. I missed the curtsy. I mumbled everything that will show you how I was so scared and overwhelmed and shocked and like it was just like a flood of different emotions.

“Meeting her and shaking her hand felt  surreal and she asked where I was from; what my project was about, and what I hoped to do with the award and appraisal.”