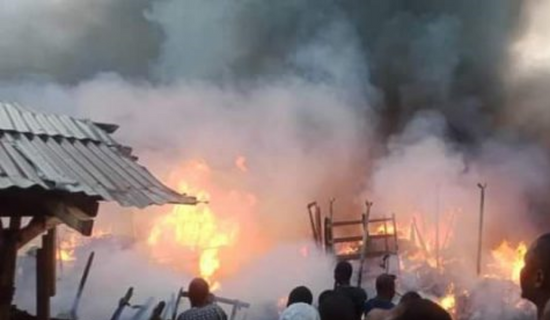 Goods and properties worth several millions of naira were on Wednesday razed as fire engulfed a section of the Sapele Main Market in Sapele, Delta State.

Witnesses said that stores on the Boyo Road before St. Luke’s Anglican Church were the worst hit as flames from the fire incident were noticed from the stores, thus throwing the traders into confusion in their efforts to salvage their wares.

It was gathered that firefighters of the Delta State Fire Service, who were called upon to help in putting out the flames, could not arrive at the scene until after havoc had been done by the fire.

LENTORLITENEWS Metro gathered that Wednesday’s inferno was the second fire incident recorded in the Sapele Main Market within the week.

The cause of the fire incident could not be ascertained as all hands were on deck to prevent the fire from spreading to other stores whilst the traders were anxiously looking forward to the arrival of firefighters.

Efforts to speak with the affected traders were futile as they kept lamenting their losses.

The Police Public Relations Officer for Delta State Command, DSP Bright Edafe, could not be reached for comments on the incident as of the time of filing this report.