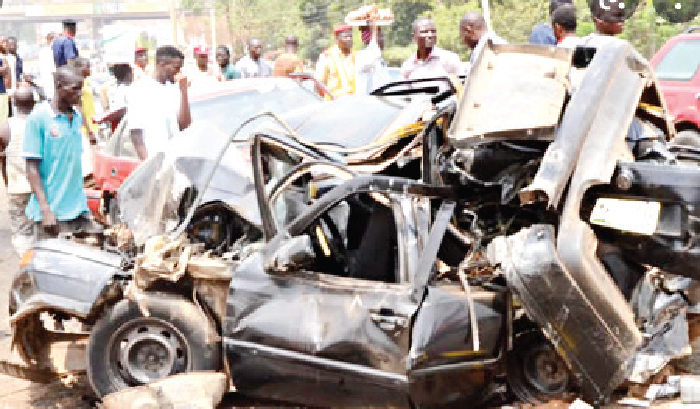 Four persons have died in an accident along Asaba-Onitsha expressway at Okpanam junction, in the Asaba area of Delta State.

LENTORLITENEWS Metro gathered that after the accident claimed the lives of the victims, some youths, who were angered by the tragic development, set the vehicle ablaze.

The situation reportedly slowed down vehicular movements and caused traffic along the expressway.

An eyewitness, who does not want his name mentioned for security reasons, said two occupants were in a Toyota Camry when the vehicle suddenly veered off the road and rammed into the four victims waiting to board a bus by the roadside.

“Three men and a lady died on the spot while others sustained serious injuries. Immediately the occupants ran away but angry youths set the car ablaze. We suspected that they were yahoo boys,” the eyewitness said.

However, another eyewitness said the driver of the Toyota Camry car was driving at top speed when the vehicle experienced a brake failure.

“The vehicle was over speeding but the driver could not control the vehicle when it experienced brake failure and veered off to the other side where people were and killed four persons. It was a terrible accident,” the eyewitness said.

Efforts to reach the Sector Commander, Federal Road Safety Corps, Delta State Command, Udeme Esiet, failed as calls and a text message sent to his phone number were not responded to.