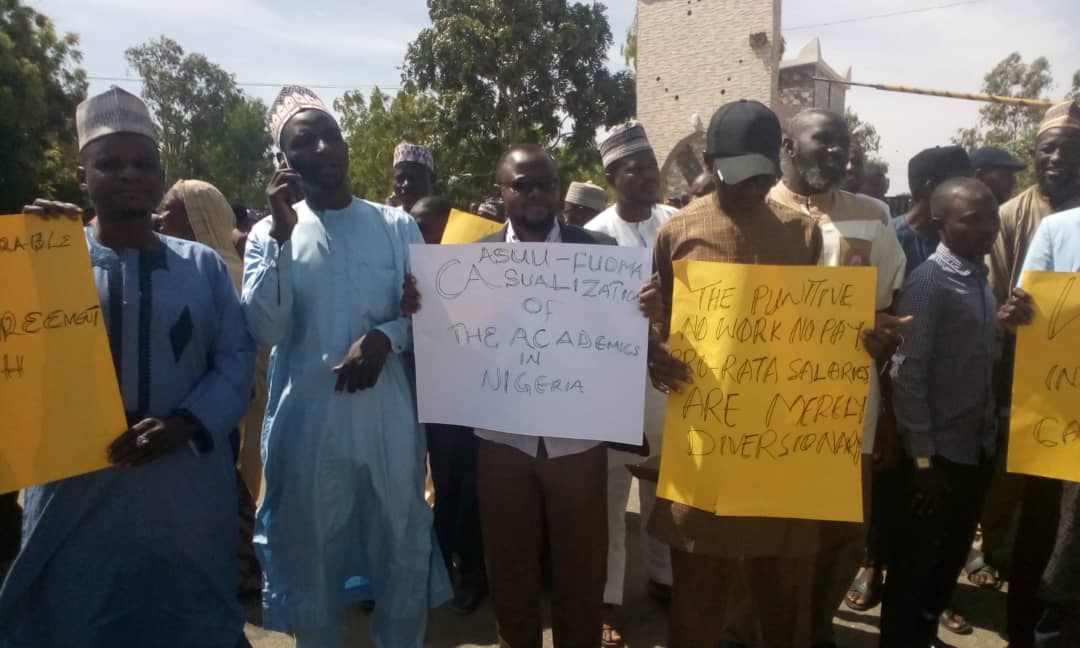 Members of the Academic Staff Union of Universities, Federal University, Dutsinma, Katsina State on Thursday staged a peaceful protest over the current crisis between the national body of the union and the Federal Government.

The ASUU members also warned of a bleak future for the Nigerian youths because of the way the Federal Government were treating lecturers.

Members of the union had earlier in the day held a two-hour congress where they reviewed the current crisis between the national union and the FG.

The members, after the congress, held a procession within the premises of the University, during which they sang solidarity songs.

The lecturers also carried placards which contained various messages such as ‘ASUU (FUDMA) says No to criminalization of legal strikes’, ‘ASUU FUDMA says No to casualization of Academics in Nigeria’, ‘The Punitive No- work, No pay and Pro- Rata salaries are mere diversions’, and ‘We are intellectuals, not casual workers’.

A statement by the ASUU members after the protest on Thursday, alleged that the Federal Government had not addressed any of the issues that led to the nationwide strike of 14, February,2022 which lasted seven months.

The statement signed by the Chairman of the union at the institution, Dr. Jibrin Shagari and the Secretary, Dr.Mzungu Ignatius, on behalf of members read, “We wish to state to both Nigerian Government and the public that this slavish treatment and humiliation of the Academia only spells doom to the future of our children and the nation, as the fate of any nation lies in the hands of her intellectuals.”

Meanwhile, the ASUU members at the Umaru Musa Yar’dua University, Katsina also on Thursday condemned the payment of half salary to members of the union at Federal Universities.

The UMYU ASUU members who spoke through their chairman,Dr. Murtala Kwarah, and the Secretary, Dr.Shamsudeen Bello, insisted that ASUU members were not casual workers and should not be treated so.

The ASUU members, however, lauded the Katsina State government for paying their salaries throughout the period of the strike.