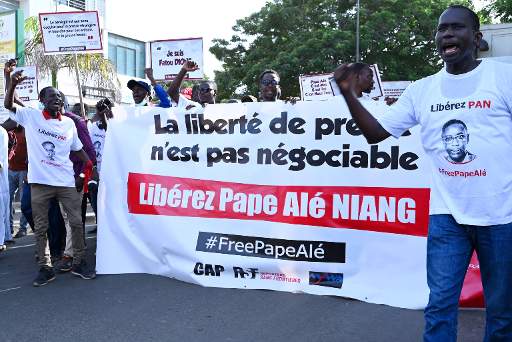 “We must continue the fight until Pape Ale Niang is freed,” said Mamadou Oumar Ndiaye, a well-known figure in Dakar press circles.

Niang, who runs the online news website “Dakar Matin” and has been critical of President Macky Sall’s government, was arrested on November 6.

He was charged and placed under a detention order on November 9.

He is accused of having broadcast confidential messages about security arrangements surrounding the November 3 interrogation of opposition politician, Ousmane Sonko, over allegations of rape.

His detention has sparked a wave of criticism from the press and civil society against the Senegalese president.

Senegal has been ranked 73rd out of 180 countries on this year’s World Press Freedom Index compiled by Reporters Without Borders, down 24 places from last year.