I made first class despite being SUG leader – LAUTECH graduate 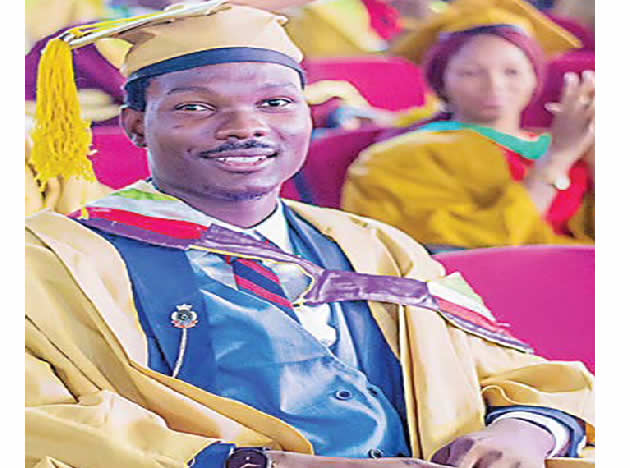 Twenty-four-year-old Olamide Olabiyi, who graduated with first class in Pure and Applied Physics from the Ladoke Akintola University of Technology, Ogbomoso, tells OPEYEMI ADEFEMI about his academic journey

How many times did you take the Unified Tertiary Matriculation Examination before securing admission?

I took UTME twice, first in 2014 with the intention to study Medicine and Surgery at the University of Ibadan, but I couldn’t get admission because I did not meet the cut-off for the course. The same thing happened the following year. Not too long after, Ladoke Akintola University of Technology began to sell post-UTME form to students who didn’t choose them during UTME. So, I just decided to buy the form. While I was in LAUTECH, I took another UTME, still wanting to study Medicine and Surgery, but I still didn’t get the course, so I switched to Pure and Applied Physics.

Medicine and Physics are quite unrelated. How did you perform as a first-year student?

My performance in the first semester was disappointing to me, despite putting in my best effort. During my computer-based examinations, I had technical issues, so when the results came I failed one course, I was heartbroken. I had already given up and had decided that I would have a carry-over the next session. But I later met a senior colleague who told me I was too good to have failed the course. He advised me to go to the IT department and complain about it. When I got there, I lodged my complaint and after checking, they told me that I actually passed the course. Then second semester came and I performed excellently well. I finished with a Cumulative Grade Point Average of 4.84 in my 100 level. I finally finished as the best graduating student in my set and my department.

How did you feel when you achieved that, particularly coming from a background of repeatedly failing to make Medicine and Surgery?

Have you always been an A student from your previous schools?

I had my primary and secondary schools in Ibadan until I gained admission into LAUTECH and left Ibadan. I am from Lalupon in Ibadan, Oyo State. When we talk about excellence, I really don’t know how to describe it. I will just say it is God’s grace. God has always given me the grace to top my classes, right from primary school to secondary school. Also, I have a flair for mathematics. I am very good at solving mathematical problems. When I got to Primary 2, I lost my dad to an accident and because of my academic excellence, I was advised to take the Common Entrance Exam in Primary 3, which I did and I passed. For every graduation in school, my name would be called for an award at least two times. From my junior class to my senior class in secondary school, I topped the class. I always want to be the best in everything I do, no matter how small or intangible it might look. I graduated as best student in secondary school.

Were there things your parents did that shaped your academic journey?

My late dad was a disciplinarian; he studied Statistics and he knew the value of education and the importance of getting grounded in whatever one does. He was always interested in our school results. My mum was a teacher then and she also always tried her best to make sure we were reading.

While I was in school, my study pattern was flexible. All I did was to make sure I attended all classes, do my assignments and the like. Another thing I did was to read at early hours of the morning like 4:30am, then I also read in the afternoon. I am not a fan of reading at night except during examination time. My study period was 4:30am till like 8am and I am okay for me the day. Also, I solve every past question related to my course of study that I lay my hands on, make enquires and research and then consult senior colleagues. I try to understand the nitty-gritty of every course.

Was there a time you felt like giving up on your goal of making first class?

There was never a time I felt like giving up but then I really felt downcast and questioned what the essence of life is with all the struggles and hard work when I lost my mum while I was in 200 level, second semester. There was never a time in my life that I felt like giving up on being the best among my peers. Just as vowed, I was able, by God’s grace, to complete my programme with As in all of my courses from the moment I restructured my goal. I finished my programme with first class in all of my 10 semesters, and a 5.0 GPA in five of those 10 semesters.

The determination paid off, the resolve paid off, the efforts and sacrifices paid off. Above all, the pains and struggles were compensated by God with those laurels.

Did you have time for extracurricular activities in school?

In school I was everywhere and actively involved in virtually everything – leadership activities, organising tutorials, drama group in fellowships.  I was involved in several extracurricular activities, ranging from my fellowship, to department, faculty, hostel and school at large. The biggest of the positions I occupied in school happened in 2018/2019 academic session when I was appointed the Head of the Students’ Union when the administration back then was proscribed. I had travelled home to take care of a particular knee pain then when I received a call from the Student’s Affairs that I was to report to the office of the Dean of Students’ Affairs on Monday morning.  I began to wonder what the meeting could be about as I did not actually have any disciplinary case that would have taken me there. I travelled to school on Sunday and reported to the Student’s Affairs office on Monday. On getting there, myself together with 12 other students were made aware that we had been appointed based on our previous semester results, which happened to be the best in each of the faculties. We were told that from that day we would be in charge of the activities of the Students Union. Then, the positions were assigned based on the best GPA of the semester in consideration.  I was having a 5.0 GPA, so I was picked as the Chairman of the Executive Committee, while the person with the second best result was made the vice chairman and third, the secretary. I held the position for two academic sessions because I was called upon again in my final year to continue with the leadership of the Students’ Union when I had thought I was done discharging my duties in 400L.

I went for my industrial training. On returning, the management requested that I continue with my administration. That was how I became a two-time head of the Students’ Union.

I was also an active member of the drama group in my fellowship, Nigeria Federation of Catholic Students and I doubled as the PRO/Provost of the unit. This was as a result of my flair for having fun. In my third year, I was elected the class governor in my department after the former one had crossed out of the department.

It was in the following year that I was elected as the President of the Catholic Youths Organisation of Nigeria Central Deanery Council of the Ibadan archdiocese and faced with the challenge of handling those positions in Ibadan and Ogbomoso simultaneously. It was not easy but I had to manage it all and balance my academic life with it. I had foreseen how to manage the responsibility of being the President of Ibadan Youths as I had projected to have my industrial training in Ibadan. I wanted to make a mark in the organisation and lay down a legacy which by God’s grace I was able to.

In all of these, I never joked with my sports, especially as it concerns football. I was the goalkeeper for my department and team captain for my class in all of our games while in school.

Was there any course you were afraid of?

I am not someone that gets afraid of courses but there are courses about which fear was created in us. There wasn’t any course I was scared of; but I had two courses that put me on my toes as they demanded a lot from me. I even considered carrying them forward till my finals.  But I couldn’t do that back then because of the reputation I had built. Those two courses were PHY 303 and 304, electromagnetism.

Was there any period you would describe as challenging while in the university?

Yes, that was when I lost my mum and also lost my grandma the following week. Seven days to the commencement of my year two second semester exam, death played a fast one as I lost my mum, may her soul rest in peace, and everything felt meaningless to me. But I rose again and took my exams and had As in all of the courses borrowed outside of the department that semester and it happened to be the best result in my class for that semester. That was God compensating my struggles, so far, it was evident.

Were there things you did differently from others to make first class?

It was not easy giving my best in both my leadership roles and in my academics. It required me to always put in extra efforts. Things or studies I would do conveniently and come out on top needed me putting much more because my responsibilities were very demanding and taxing. I made sure to make efficient use of my study time.

Did you lose any friends or sacrifice any relationship to be able to focus on your academic goals?

I didn’t lose friends at all. I had two like-minded friends and some others who were not really like-minded, but they remained my friends all the same. I didn’t lose any of them. Then, I just knew how to manage everyone. I am a party person as I like to show up to celebrate with friends and family at any point in time. There was literally no one in my class that played as much as I did. I knew what I was aiming for, I knew my goals and no matter the play or fun I was having, when it was time to read I would.

What limitations do you see in your chosen field of career?

The limitation in this field is that Nigeria is no respecter of sciences. It doesn’t really celebrate sciences and it is so unfortunate that we have found ourselves where we are. There are no career prospects for courses like that, as regards sciences, engineering or technology in Nigeria. Nigeria does not celebrate sciences and it is a very big dent on the nation.  When you are asked what you are studying in school and you say sciences, the first thing that comes to people’s mind is that one would end up being a teacher or lecturer

What are the job prospects of your course?

There are several job opportunities in this field – academia, engineering and the like.