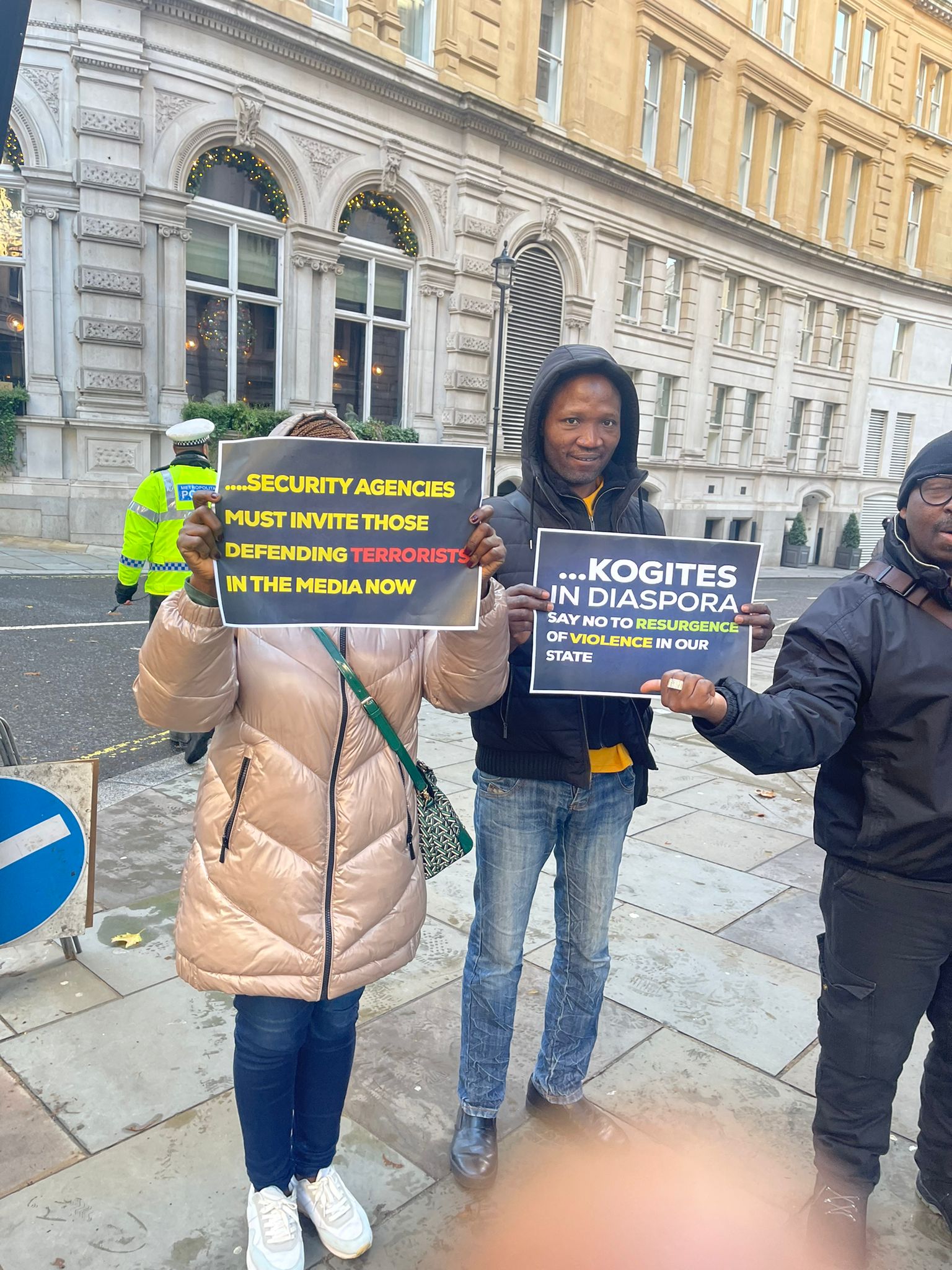 A group of Nigerians in the United Kingdom under the aegis of Kogites Disapora Coalition on Monday in London staged a peaceful protest at the Nigerian High Commission against what they described as the resurgence of insecurity in Kogi State.

The protesters led by the Convener of the coalition, Ayo Akinuli-Kofar, who is a resident in Manchester, said they came to formally send a message to the President, Major General Muhammadu Buhari (retd.), through the Nigerian High Commissioner to the United Kingdom.

Their request specifically was for Buhari to ensure that the sponsors and perpetrators of terrorism and banditry which was resurfacing in the state be “investigated and brought to book.”

The protesters in the photographs and videos sent to The LENTORLITENEWS in Abuja were seen with banners with inscriptions such as ‘Kogites in diaspora say no to resurgence of violence in our state’, ‘Security agents must invite those defending terrorists in the media now’ and Kogi must not return to dark days of daily blood letting.’

They declared that the protest would continue should the Presidency, the state government and security agencies delayed or refused to ensure the arrest and prosecution of alleged defenders and enablers of insecurity in the state.

The petition to Buhari deposited with Nigerian High Commission (popularly known as Nigerian House) in the UK and signed by Akinuli-Kofar, was titled, “Petition requesting immediate investigation and prosecution of all sponsors of violence in Kogi State.”

He said, “The feelers from home are quite disturbing and we cannot allow Kogi State to be plunged into chaos by violence mongers. Kindly act on these our cries for help in Kogi State and do the needful for our people’s safety and peace before it gets out of hand.

“Your Excellency, kindly accept the assurances of our highest considerations. Your Excellency, it is with utmost humility and a patriotic sense of duty that we address this urgent petition to your good office regarding an imminent deterioration of the security situation in our dear Kogi State after a considerably long period of relief. Although, based abroad, we are in constant touch with the ongoings in Nigeria, particularly in Kogi State.

“Most of us return home to vote during elections as part of our civic responsibilities as we have no other country than Nigeria. For a long time, Kogi State was battling with violent crimes and criminalities that included kidnapping, armed robbery, political thuggery and, even, terrorism. But respite came about six years ago with the inception of the current administration in the state.

“It was in recognition of this that the Association of Nigerians in Diaspora based in the United States of America bestowed its “Icon of Security” award on Governor Yahaya Bello in May 2021. This was also replicated by your administration just a few days ago with a distinguished award for security management presented to the Governor in Abuja.

“However, we are seriously concerned that insecurity at its worst form may raise its ugly head again as the 2023 general election are approaching. Kogi has been in the news for many good reasons, one of which was widely reported in the dailies a few hours ago. The state was given an award of excellence in Transparency, Debt Sustainability and Revenue Mobilisation. Regardless of who the governor is, as we are not politicians, we are happy that Kogi is gaining grounds on the world map.

“However, investigations through families and friends that are on ground in the state have revealed that certain politicians are beginning to recruit criminal elements who are hellbent on ruining the peace being enjoyed in the state for so long. Of major concern to us are the activities and inflammatory statements of some prominent politicians who seem to trade in instigating violence and bloodshed.

“We must at this point express our disappointment that Governor Bello is being overly politically correct by not taking a decisive action in collaboration with relevant security agencies to curtail the nefarious activities of these enablers of insecurity perhaps because they are politicians and the government may be wrongly accused of intimidating opponents or prominent figures. But for how long will the lives of Kogi people be played as a political chess game as not to step on toes?”