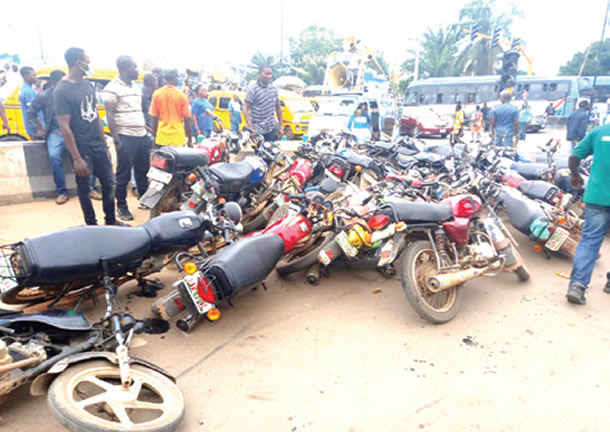 Traders are hard hit by the ban of motorcycles in several states and the threat by the Federal Government to outlaw commercial motorcycles, popularly called “Okada.”

Motorcycle imports into Nigeria declined by 35.92 per cent in the second quarter of 2022, according to the foreign trade report of the National Bureau of Statistics for the period.

This decline comes as the Federal Government considers banning the use of motorcycles and mining activities following the terrorist attacks on the Kuje correctional facility on July 5 as well as others recorded nationwide.

The Attorney-General of the Federation, Abubakar Malami, revealed that the use of motorcycles allowed the terrorists to move around funds sourced from mining and channelled to purchase arms.

“The issues deliberated borders on the logistics being used by the terrorists, Boko Haram, and bandits, among others, in executing their unfortunate act of terrorism and terrorising the country.

“It was extensively deliberated upon as to what needs to be done for the purpose of ensuring that their means of logistics are indeed adequately considered and necessary steps are taken in degrading their capacity to move around.

“The government would look into that possibility, with particular regard to restriction on use and distribution of motorcycles, which is the most conventional logistical means being deployed by terrorists,” Malami said.

The National President of Amalgamated Commercial Motorcycle Riders Association of Nigeria, Adebayo Apelogun, kicked against the proposed ban on the activities of motorcycle operators in the country.

Apelogun told The LENTORLITENEWS that the decision, if implemented, would throw millions out of jobs, noting that this would worsen insecurity in the country.

He said, “Cutting off the head is never a solution for headaches. The proposal for an outright ban on motorcycles in the country would throw millions of our members out of employment and this will add more to the insecurity we are trying to solve. Don’t let us forget that an idle hand is the devil’s workshop.”

States like Lagos, Anambra and Zamfara have banned the use of motorcycles in certain areas.

In August this year, the Anambra State Government announced the extension of a ban on commercial motorcycle operators to Nnewi and Ekwulobia. The state government, before now, had already banned commercial motorcyclists in Onitsha and Awka, a policy that had been effectively operational.

Also, in August, Governor Bello Mattawale of Zamfara State, banned the riding of motorcycles from 8 pm to 6 am in Gusau town. He directed security personnel to shoot at the sight of anyone found violating the new order.

“It is not going to be a good policy because you will end up encouraging more crimes while trying to solve some others,” one of the traders of motorcycles in Nnewi, Anambra State, Osita Udume, said.

“It is also going to cause more economic troubles for some of us in the value chain,” he noted.