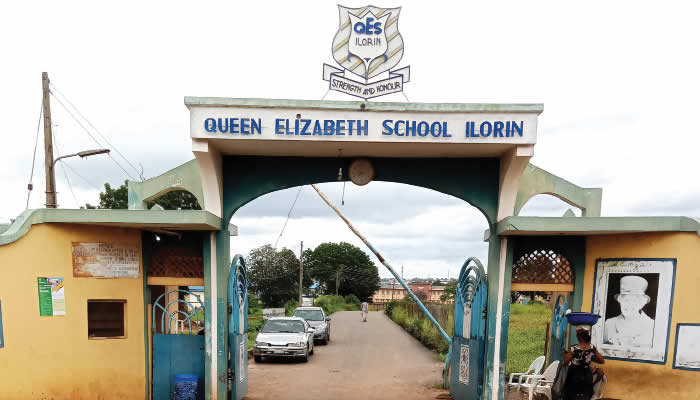 The late British monarch, Queen Elizabeth II, known titularly as Queen of the United Kingdom and other Commonwealth realms from 6 February 1952 until her death in 2022, did not fail to leave her footprints on Nigerian soil as some schools in the world’s most populous black nation even till date are in her name and honour. Though aged, many of these schools are surviving legacies of the great monarch and serve not only to commemorate her ascent to the throne but to also celebrate her life.

There are at least two such schools in the country— Queen Elizabeth Secondary School and the Queen’s School Ibadan/Ede, which was established to commemorate her ascension to the throne in 1952.

In the city of Ilorin lies the Queen Elizabeth Secondary School, named after the late Queen, established May 21, 1956 by the then Northern Region Government under the leadership of the late Premier of the Region, Sir Ahmadu Bello, the Sardauna of Sokoto.

At the time, there was a clamour to provide a sound education for girls in the region as well as improve the girl-child education; this is observed to have come at a time when girls were abstained by their parents from formal education because of the then societal standards.

Her Royal Majesty, Queen Elizabeth II of England, unveiled the plaque which commemorated the official opening of Queen Elizabeth School, Ilorin, 66 years ago. The monarch’s idea was for the school to be the best in the country for the education and moral training of the girl child.

On our correspondent’s visit to Ilorin, the current principal of the school, Hajia Lawal, disclosed that the school was planning to organise a commendation service in honour of the late Queen Elizabeth II.

Lawal said, “The school is organising a programmeme in remembrance of the Queen. We will be celebrating the late Queen at the school on September 19 by organising a special programmeme for her late majesty. It will feature a playlet titled, “Her Royal Majesty’s visit to Ilorin in 1957,” the students’ choir and the old students’ choir will render special hymns at the occasion and the State Governor, Mallam AbdulRahman AbdulRazaq, has approved the programme and will be in attendance. Old Students of the school have also sent tributes which will be displayed. The play will tell us the history of the Queen and the role played by the Queen. Our teachers and our students will participate in the programme. The school will reopen on September 19.

“Queen Elizabeth School Ilorin is the only school named in honour of Queen Elizabeth II, other schools such as Queen’s College and Queen’s School scattered in various parts of the country do not bear the late Queen’s name.

“It was established by the late Premier of the Northern region, Sir Ahmadu Bello. He conceived the idea of bringing the girls in the Northern region together. The Queen visited the school in company of Sir Ahmadu Bello and the then Emir of Ilorin, Alhaji Shuaibu Abdulkadir I, when she visited Nigeria, however, when the Queen visited Nigeria in 1957, she was brought to visit the 56 pioneer students in the school and she officially laid the foundation of the school, and it was named in her honour.”

Lawal who is an old student of the school, from the class of  1976/1981 revealed that the school community comprising the management, staff, students and the old students were devastated by the news of the death of the Queen.

“We are all devastated about the death of her majesty but we are consoled because it was a life well spent. So far so good, she was the longest serving Monarch in the history of Great Britain. She ascended the throne at the age of 26 and spent 70 good years as Queen and head of the Commonwealth of Nations.

“This is what we should give glory to God for. We are happy that she lived an exemplary life in uniting Commonwealth Nations and her reign was very peaceful and witnessed many good things. What everyone prays for is to have a long and eventful life, although we were devastated that she was no more with us but all her good work remains with us. We will be present at the Queen’s funeral and our old students in England will all be at the funeral.

“Our immediate former Principal, Hajia Rahmat AbdulRahman, has told me that she will attend the funeral. She will represent me and she promised that she would send me the photographs,” she said.

The school’s Vice Principal, Administration, Hajia Abdulkareem Titilola and the Vice Principal, Students Affairs, Hajia Jimoh Suliat, said that the staff and students will participate actively in the programme to honour the Queen, showcase their talents, contributions made by the Queen and the lessons learned from her lifetime.

They said, “When the Queen died, we were devastated and we mourned her like our own mother. We have missed the Queen. Even mere mentioning the name of the Queen has lifted the school and that has earned us a lot of respect from people.

An old student of the school, simply identified as Jimoh, said “the old students will be collaborating with the government in the commemoration service to give the Queen a befitting burial. The old students in Kwara and other parts of the country will also be coming together to honour the Queen.”

The school principal noted the prestige and benefits the name “Queen Elizabeth” had afforded the school over the years.

She said, “The name has attracted government patronage and many others, some old students have brought many things to the school. The school is owned by the 19 Northern states but Kwara state is the custodian of the school.

“Sir Ahmadu Bello wanted the girls in the Northern region to come together and share their individual cultural values and he actually brought girls from different cultures together, the Walis, Tukurs etc. We even have expatriate students from Pakistan, India; South Africa and many others. Since we all have different cultural backgrounds, the school was established to promote unity; it has fulfilled this purpose since its establishment.”

Located in Ede, the former outpost of the powerful Oyo empire, now Osun state, stands the proud Queen’s School, established in 1952 under the British Colonial masters when the Late Queen Elizabeth II, ascended the throne to begin a reign which lasted 70 years.

It is worthy of note that the Queen’s School was created from the existing Queen’s College Lagos. The school, which is all-girls, was eventually relocated to Ibadan in 1967.

Our correspondent on a visit to the school spoke to some old students who said the late Queen would be missed by many.

Kemi Ajayi, an old student of 50 years, said “Our school was created out of the already existing Queen’s College Lagos. I think it was believed that some students were going to Queen’s College in Lagos from the hinterlands, so those who established the Queen’s School did so to reduce the need to travel long distances to go to school. The school was later relocated to Ibadan; we have the same anthem and school uniform till date.

Taught to be ladylike

Another old girl of the school, Doyin Akinlabi, told our correspondent that although the school did not teach them about the Queen, they were taught to behave like ‘ladies’ which she said was an attribute of the Queen.

She said, “I am happy to have passed through Queen’s School, Ibadan and the way we were made to believe and behave as queens. We were brought up to know that we should see ourselves as someone of importance, even those of us from a humble background.

“We were taught to always behave well. The whole world will miss the Queen and her impact in the lives of many people. Her ascension, we were told, was what led to the creation of our school. The world will miss her.”

In nostalgia, another old girl of the school, Funmi Showande, told our correspondent of the great impact the school made in the lives of many notable Nigerians.

Showande said, “There are many great persons who attended Queen’s School, Ibadan and this attests to the fact that we were well taught and our lives today are reflecting dedication, honesty and love.

“The Ebola heroine, Stella Adadevoh, who stopped the Liberian man who brought Ebola to Nigeria from spreading it to many more people was an old girl. There are judges, lawyers, doctors doing very well both in Nigeria and outside. The wife of the Ondo state Deputy Governor, Esther Aiyedatiwa attended Queen’s School as well.

“The Queen had a great influence on the way we were taught and made to behave. Although Queen Elizabeth was thousands of kilometres away from us, she seemed so close, especially on the day she died, she had almost become a permanent feature in the United Kingdom and it will take time to get used to her exit.”

An article, written by the Chairman, Queen School Old Girls Association Board of Trustees, Olufemi Ogunsanya, to commemorate the school’s 70th anniversary said in part, “Four pioneering students, along with four pioneering teachers, moved from Queen’s College Lagos to the newly established Queen’s School at Ede, a town in the old Western Region of Nigeria.

“The Western Regional government owned the school. The motto of Queen’s College Lagos was, and remains, “Pass On The Torch”! The torch of knowledge and wisdom was brought from Queen’s College, Yaba, Lagos to the sleepy town of Ede!

“A full school, with its traditions, moved Forms II to V to Ede in September 1951. The team was led by four pioneering teachers and Miss E. Hobson as Principal.

“Girls were brought up to be strong, confident, hardworking, articulate and yet remain “fine” dignified ladies. Girls were taught etiquette, how to sit and walk “like a lady.

“Queen’s School, Ede was noted for a well-rounded education Outside of academics girls had to learn to sew, cook, garden, dance, sing, participate in sports, drama, Girl Guides, Literary and Debating Societies and even had phonetics classes. Girls were groomed to be well-rounded women! No wonder many of the Alumnae turned out to be renowned doctors, professors (a set boasted of as many as 10 professors!), Engineers, Vice-Chancellors, Lecturers, Permanent Secretaries, Special Assistants, Commissioners, Deputy Governors, Judges, Lawyers, etc.”

A distinguishing factor observed by our correspondent from these schools is the featured use of blue and white, which denotes ‘Royalty’, with the colour blue being the favourite colour of the late monarch.