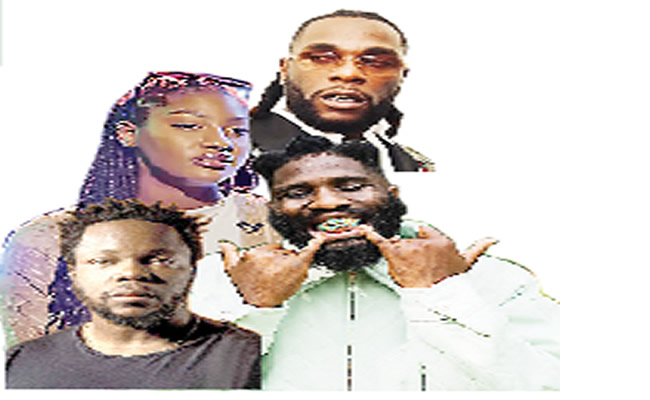 Unarguably one of the most prestigious music awards platforms in the world, the Grammys is widely coveted by artistes all across the globe. In recent times, Nigerian singers have been featuring on that list, and the forthcoming 2023 edition is no different. Saturday Beats takes a look at the four Nigerians that have been nominated for the respected plaudits

In the early days of 2018, if anyone had told Damini Ogulu, aka Burna Boy, that by 2022, he would be the first Nigerian artiste of all time to bag four consecutive Grammy Awards nominations, he probably might have laughed and went on his way without giving it as much as a thought. However, that has turned out to be his reality.

He was also nominated in the ‘Best Global Music Album’ category. He will slug it out with Angelique Kidjo and Ibrahim Maalouf, Berklee Indian Ensemble, Anoushka Shankar, Metropole Orkest and Jules Buckley featuring Manu Delago, and Masa Tukami.

On account of her feature on American rapper, Future’s rap song, ‘Wait For U’, rising singer, Temilade Openiyi, aka Tems, was nominated in the ‘Best Melodic Rap Performance’, and ‘Best Rap Song’ categories.

Based on her feature in the song, ‘Move’ off Beyonce’s ‘Renaissance’ album, Tem is up for another nod, as the album was nominated in the ‘Album of the Year’ category.

Recall that in 2021, Tems also made it to the nominations list of the awards. She was in the ‘Best Global Music Performance’ category on account of her feature on Wizkid’s hit song, ‘Essence’.

Another Nigerian artiste that got a Grammy nomination is the United States of America-based rapper, singer and actor, Tobe Nwigwe. He was nominated in the ‘Best New Artiste’ category.

Nwigwe collaborates with his wife, Fat (Martica Rogers), and friend and producer/rapper, LaNell Grant, also known as The Originals. The three came together while working with Nwigwe’s non-governmental organisation, TeamGINI.

In 2019, Nwigwe and The Originals performed at NPR’s Tiny Desk Concert series with a backing band. His music has attracted a lot of worthwhile attention, including from a former US First Lady, Michelle Obama, who put his song ‘I’m Dope’ on her workout playlist. In 2020, Nwigwe went viral on digital platforms for his song, ‘I Need You To’ (featuring Breonna Taylor). He said God gave him a vision to do the song as a public service announcement. He also performed his songs, ‘Try Jesus’ and ‘Eat’ at the 2020 BET Hip Hop Awards.

Born in Houston, Texas, USA, he also stars in the Netflix series, ‘Mo’. He played football in both high school, and while at the University of North Texas. He is of Igbo (Nigerian) descent.

Ambrose Akinmusire was nominated in the ‘Best Improvised Jazz Solo’ category for the work, ‘Rounds (Live)’.

Akinmusire is an avant-garde jazz composer and trumpeter.

Born and raised in Oakland, California,  USA, Akinmusire was a member of the Berkeley High School Jazz Ensemble, where he caught the attention of saxophonist, Steve Coleman, who hired him as a member of his Five Elements band for an European tour. He was also a member of the Monterey Jazz Festival’s Next Generation Jazz Orchestra.

He studied at the Manhattan School of Music before returning to the West Coast for a Master’s degree at the University of Southern California. He also attended the Thelonious Monk Institute of Jazz in Los Angeles.

He was featured on Kendrick Lamar’s 2015 song, ‘To Pimp a Butterfly’.

Describing his background in an interview with a music website, Liquid Music, he had said, “I was born and raised in Oakland. My dad is from Nigeria and my mum is from a small town in Mississippi.”