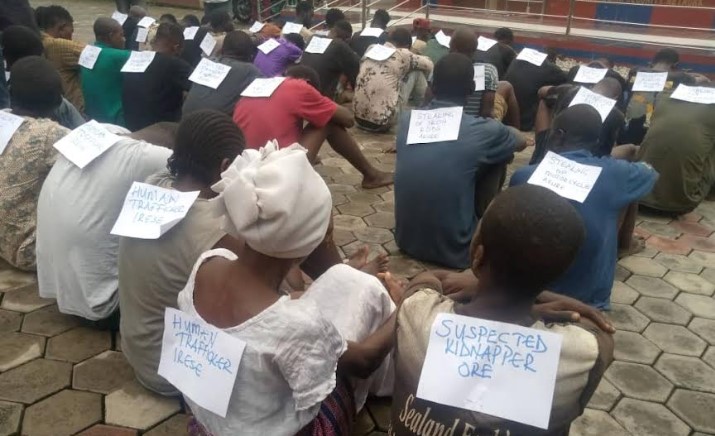 No fewer than 45 persons were arrested by the men of the Ondo State Security Network Agency also known as Amotekun for allegedly involving in various criminal activities in the state the recent time.

Specifically, the corps mentioned that the suspects were involved in various criminal offences which include kidnapping, armed robbery, stealing, snatching of motorbikes, rape among others, and they were arrested at different locations in the state.

Parading the suspects at the Amotekun headquarters, in Akure, the state capital, on Wednesday, the state Commander of the corps, Akogun Adeleye, said the suspects were arrested within two weeks.

He said, “A couple of weeks ago, we deployed additional hands to all the 18 local government areas of the state to assist in beefing up the security architecture of Ondo State and it has actually yielded a lot of results.

“Within the last two weeks, we have been able to curtail the excesses of the criminals ranging from kidnapping, armed robbery, and rape among others. We have 45 criminals that we have concluded their investigations and they are ready to go for prosecution”.

“At Ore, in Odigbo Local Government, we have some suspects who kidnapped a family and we immediately swung into action and we were able to arrest the kidnappers and release the victims. We also have those that are regular in housebreaking, in the midnights, they have the ways of opening doors and silently entering to molest innocent people and dispose them of their valuables.

Adeleye stated, “We also have some people that specialise in using vehicles to steal goats across the state and some of the goats have been recovered from them. We have a gang of fraudsters that uses spiritual means to defraud some people in society. We have a case of some kidnappers, they usually fake that you have hit their bikes, and when you come out to sympathise with them, they will just enter the vehicle and drive the victim (s) away. We have eight suspected kidnappers from the Central and Southern Senatorial Districts of Ondo State.”

Adeleye, who is also the Special Adviser to Governor Rotimi Akeredolu on Security Matters, emphasised that all security agencies in the state have been properly briefed on the influx of undesirable elements to the state, declaring that the state was determined to wage war against them.

“I must let you know that virtually all these operations were done in collaboration with other sister security agencies in the state. The trend of crimes in Ondo state is now seriously coming down, as far as we are concerned, we are impressed about the safety of lives and properties in the state. If you look at the Akure metropolis, all major junctions are manned by security operatives and we are having more patrol all 18 local government areas of the state.

“As we speak now, we have put measures in place in order to ensure that our roads are safe from criminals, our patrol vehicles are moving round for 24 hours. We want to reassure the good people of Ondo state to go about their normal duties. Again, the reinforcement ban on motorcyclists at night is also one of the major things responsible for the downward trend of criminal activities in the state generally”, the commander said.

One of the suspects, who was arrested for kidnapping, Usman Muhammadu confessed to killing three victims, who were abducted by his gang but refused to say why the victims were killed.

The 25-year-old man also said he had collected a ransom of over N500,000 from relations of victims abducted by his gang.

Explaining how they operated, the suspect said “we have an informant who we pay to give us information. After we have the information, we swung into action, kidnapped the victim, marched them into the forest, and demanded ransom from their family members.

Also paraded, was a suspect identified as Yaro Yaya, who confessed to being the informant of the suspected kidnappers, as he said “My own job is to pass information over to the members. I don’t know what they do with the victims, or how much they collect as ransom, they just settle me out of the ransom collected. I don’t ask questions, I collect whatever is given to me by the leader of the group”.