HomeLatest newsRising stars to look out for in Qatar
Latest news

Rising stars to look out for in Qatar 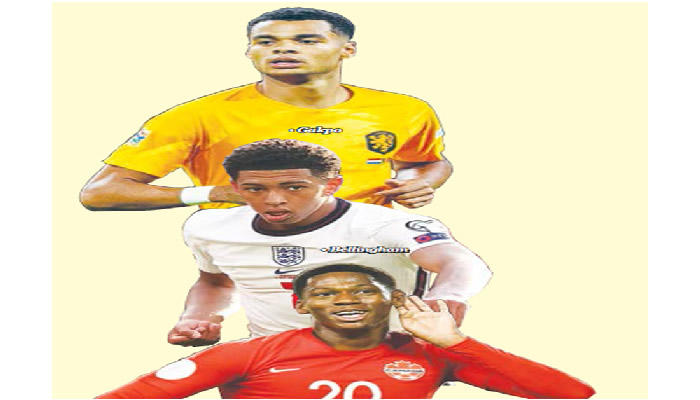 The World Cup gets underway on Sunday in Qatar with hosts losing their opening game to Ecuador. Eight groups of four teams will provide the early entertainment before the knockout stages and there are plenty of big names in action. We have picked out one player from each group who we think could announce themselves on the world stage in the coming weeks

If the transfer rumour mill is to be believed, Manchester United and Arsenal are just two of the clubs linked with a move for PSV Eindhoven and Netherlands star Cody Gakpo.

The forward has scored 13 goals and set up 16 in just 24 games in all competitions this term, meaning he is heading into the tournament in top form.

Gakpo, 23, has only played nine times for his country but has three strikes and two assists in those caps.

With two of those goals coming in his last three games for the Oranje, Group A opponents Qatar, Senegal and Ecuador will have a hard time stopping the Dutch flyer.

The Birmingham academy product is a Rolls Royce in the middle of the park and has gone from strength to strength this term.

He was named the youngest captain in Bundesliga history earlier this campaign and has nine goals for Borussia Dortmund in 2022-23.

This should be the first World Cup of many for the teenager and he will be keen to make his mark straight away against Iran, USA and Wales in Group B.

Argentina have a plethora of attacking talent but Cristian Romero is the sort of defender who can help turn them into World Cup winners again.

Romero, 24, continues to improve under the tutelage of Antonio Conte at Tottenham with his aggressive defending on the ground and in the air.

Like all good modern defenders, he is comfortable on the ball too and will feed La Albiceleste’s creative sparks.

His country are currently on a 36-game unbeaten run, while they have kept clean sheets in each of Romero’s last 10 internationals — he will be a key figure if they are to go far.

A right-footed left-back, Joakim Maehle has turned into a creative force for both club and country in recent seasons.

Since moving from Genk to Atalanta in 2021, the Dane has been a key cog in the Italians’ free-flowing side.

And for Denmark, he is in red-hot form with one goal and three assists in eight games so far in 2022.

Linked with a move away from Bergamo last summer, strong displays in Qatar will put him in the shop window again.

After opting to play for Germany — the country of his birth — over England and Nigeria, Jamal Musiala is proving a lethal weapon.

He has 12 goals and eight assists in all competitions for Bayern Munich already this term and is another player coming into his first World Cup absolutely flying.

After only playing a small part in Germany’s disappointing Euro 2020 campaign, Musiala could well be a regular starter under Hansi Flick in Qatar.

In a group with Spain, Japan and Costa Rica, the 19-year-old forward will be out to prove himself on the biggest stage.

Canada may be outsiders in Group F, yet they also have one of the biggest talents in Jonathan David.

His record for Les Rouges is a fantastic 22 goals and 13 assists in 35 games, though they do not often face teams with the quality of Belgium, Croatia and Morocco.

The New York-born forward has also enjoyed a productive start to the campaign for Lille in Ligue 1 with nine strikes in 15 outings.

Canada’s only other World Cup appearance in 1986 saw them fail to score a goal or pick up a point and if that is to change, David will have a big say.

Though Tottenham fans have taken Richarlison to heart quickly, he has yet to find the back of the net in the Premier League for them.

While Brazil have huge amounts of attacking talent, the Spurs forward is a key man for Tite’s side.

Richarlison has 17 goals in 38 games for the Selecao, including seven in his last six, as well as two assists.

Having shook off a recent calf injury, the 25-year-old will be straight into Brazil’s starting XI if he is back to full fitness.

Napoli’s attacking play has been earning plenty of praise this term, yet their defenders have been just as good.

Min-Jae Kim has started all but one of their games in both the Serie A and Champions League — excelling at the heart of defence.

In a South Korea team packed with talent, he can help marshal them through perhaps the hardest group in the tournament.

Portugal, Uruguay and Ghana will all feel they should qualify for the knockout stages, but getting past Kim will be no easy feat.