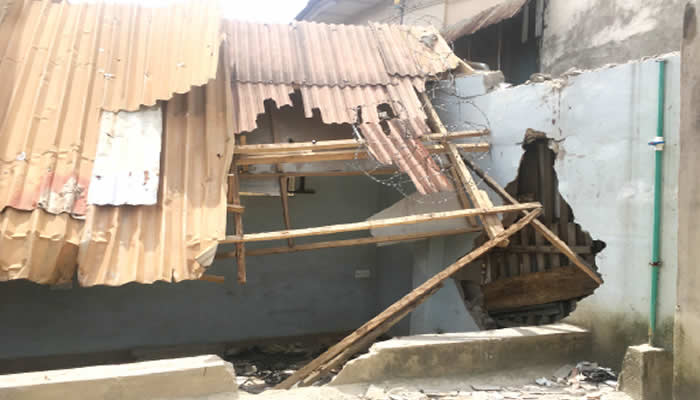 A shop owner, Margaret Balogun, has accused her neighbour, Olayemi Oshinowo, of demolishing her property on Adesina Street, Akowonjo, in the Alimosho Local Government Area of Lagos State.

Margaret, while narrating her ordeal to our correspondent, said Oshinowo allegedly perpetrated the act with the backing of some officials of the Ministry of Physical Planning and Urban Development.

She also noted that the state government officials were accompanied by five policemen who protected them during the operation.

LENTORLITENEWS Metro gathered from Margaret that Oshinowo had been complaining that the flood barrier of her shop was obstructing the second gate of her building in the area.

Following the complaint, she said Oshinowo filed a petition to the relevant government agencies, adding that a senior official in the ministry, one Ajibola, met with Oshinowo, her lawyer, Dada Balogun and their landlord, Folashade Makinde.

She, however, noted that despite doing the necessary adjustment on her shop, the government officials demolished it, adding that Oshinowo had been allegedly using her influence to victimise her.

Margaret said, “The first time the officials visited my shop for the demolition, one of the officers who saw me using my phone to record them in the act threw a stone at me. When they attempted entering my house, I cautioned them.

“Afterwards, they broke the fence, detached the two doors and burglary proof of the shop. I complained but they threatened to put me in a Black Maria.”

During the second demolition, Margaret said she was at home when her sister informed her that the government officials from the ministry led by policemen had stormed her shop to continue the demolition.

She said, “I was in the bathroom having my bath when I heard my sister calling me. I quickly stepped out of the bathroom and dressed up. But on getting there, I saw four mobile police officers demolishing my shop.

“I asked the man that led the policemen to introduce himself but he refused. He only said they are from the Ministry of Urban and Physical Planning, Alausa, and that I have been told to demolish the structure for not having a permit to erect a gate on it.”

Oshinowo, when contacted, denied inviting the state government officials who demolished the shop.

She said, “When someone is doing something and she is unapproachable, there are people that the government has put in place to attend to such matters.

“I only reported to the state government. I did not invite the officials and I was not there when the demolition happened. Margaret’s landlord’s (Makinde) house has two big gates.

“My inherited house is on Adesina Street. We have an approved plan and presented it in Alausa when they demanded it, but they were unable to present theirs on two different occasions.”

She said, “I requested for a virtual meeting because of my busy schedule, but Oshinowo did not oblige. I also presented my documents at the meeting.”

Contacted, the Permanent Secretary of the ministry, Abiola Kosegbe, declined to comment on the matter.

She said, “You can’t be talking to me from LENTORLITENEWS. I don’t know you. Please call back. I am sorry.”

Efforts to speak to her afterwards proved abortive as she did not pick calls made to her phone and had yet to respond to a text message sent to her mobile phone as of the time this report was filed.

The state Police Public Relations Officer, Benjamin Hundeyin, could not be reached for comment as calls made to his phone number were not answered.

A text message sent to his phone number had yet to be replied as of the time this report was filed.