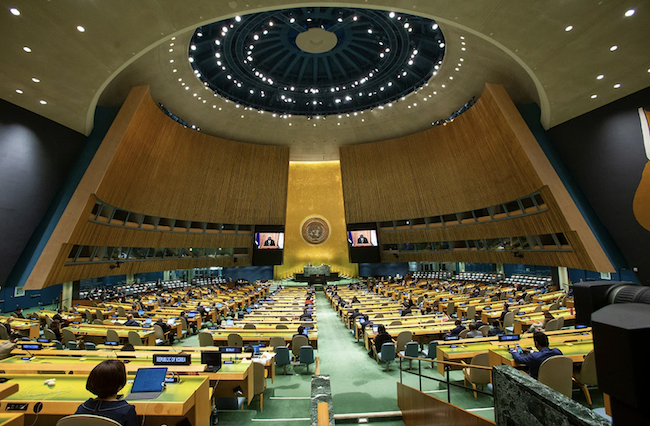 The sixth committee of the United Nations General Assembly, on Friday, adopted a resolution to move toward drafting a treaty on crimes against humanity, breaking three years of paralysis brought on by the opposition of a handful of countries.

According to Human Rights Watch, the consensus decision by the Committee, which handles legal issues for the General Assembly, including possible new treaties.

Crimes against humanity are acts of murder, rape, torture, apartheid, deportations, persecution, and other offences committed as part of a widespread or systematic attack against a civilian population based on a government or organisational policy.

These crimes can be committed at any time, not only in situations of internal or international armed conflict.

The proposed treaty would require all state parties to include the definition of these acts in their national laws and to take steps to prevent and punish them in national courts.

A senior legal adviser for advocacy at Human Rights Watch, Richard Dicker, said, “With rampant offences amounting to crimes against humanity in recent months in countries such as Myanmar, Ukraine, and Ethiopia, the movement towards negotiating a treaty to prevent and punish these crimes is a positive though overdue step.

“A treaty prohibiting crimes against humanity will provide more protection for civilians and today’s decision is an advance in extending the rule of law at a moment when that very concept is under intense assault.”

Unlike the crimes of genocide, torture, apartheid, and forced disappearances, there is no international treaty specifically devoted to crimes against humanity.

The Human Rights Watch said, “The Rome statute of the permanent International Criminal Court was a leap forward in defining crimes against humanity and should be universally ratified by all governments.

“And yet the lack of a comprehensive international treaty on these offences constitutes a major gap in international law. Crimes against humanity have proliferated in every region of the globe.

“A future treaty will contribute to strengthening the legal tools available to countries and facilitate more trials of these crimes in national courts,” it added.

In 2019, the International Law Commission, a UN expert body mandated to develop international law, completed and submitted draft articles for the crimes against humanity treaty to the Sixth Committee for its consideration.

Action on the draft articles then stalled there due to obstruction by a small number of repressive states led by China and Russia.

Early in October, in an attempt to break through the Sixth Committee stasis, eight countries in a cross-regional group led by Mexico that included Bangladesh, Colombia, Costa Rica, Gambia, the Republic of Korea, the United Kingdom, and the US, submitted a resolution to create an ad-hoc committee in 2023 to discuss the substance of the draft articles and report to the UN General Assembly in Fall 2023.

Several weeks of intense negotiations, including with China, led to a few compromises contained in the November 18 resolution text. One concession is the change from an ad hoc committee, which is more robust and guarantees civil society participation, to “interactive” sessions, which are more ambiguous.

Meanwhile, support for progress swelled to 86 co-sponsoring countries. Bolstered by this broad support, the resolution was adopted in the Sixth Committee by consensus including those few states whose only interest lay in derailing the process.

The resolution accomplishes three important goals, it mandates a forum for further discussion on the draft articles; it sets up a defined process, and it indicates a clear timeline by which a decision will be made for the next steps.

The resolution provides that the Sixth Committee will resume its work on the draft articles in two “interactive” sessions during the next two years in April 2023 and 2024.