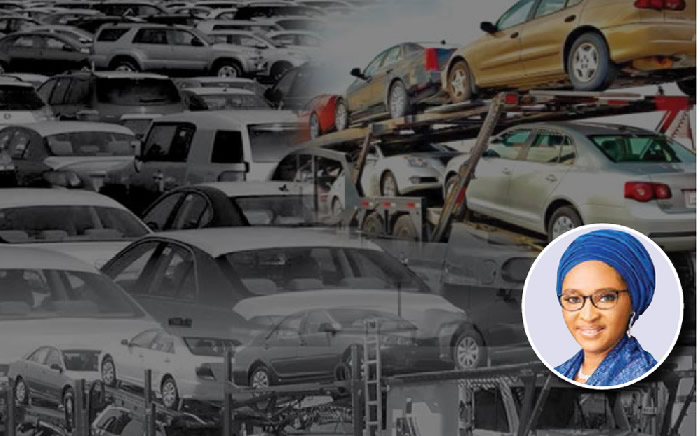 There was a drop of about 40 per cent in the number of imported vehicles that came into the country between January and October this year through the Ports & Terminal Multipurpose Limited compared to the figure for the same period of the previous year.

While a total of 192,287 units of vehicles came into Nigeria in the first 10 months of 2021, only 114,159 units were imported through the same terminal in the same period in 2022. The terminal is responsible for the importation of most vehicles coming Nigeria.

A document obtained exclusively by our correspondent from the Customs Public Relations Officer in charge of the PTML terminal, Muhammad Yakubu, showed that from January to October 2022, only 122 vessels berthed at the ports as against 167 vessels recorded within the same period in the previous year.

The document also showed that the terminal recorded a total number of 30,560 containers in the first 10 months of 2021 as against 24,181 recorded in a similar period of the current fiscal year. These figures showed a serious drop in activities in the terminal, which is known to be a Roll-On-Roll-Off terminal in  Nigeria where almost 85 per cent imported vehicles coming into the country come through.

Clearing agents operating at the nation’s maritime industry have blamed inconsistent government policies and the newly introduced Vehicles Identification Number for clearing of imported vehicles as reasons behind the decrease.

The PTML chapter Chairman of the National Association of Government Approved Freight Forwarders, Mr Thomas Alor, also blamed the levy imposed on imported cars by the government for the decline, adding that the VIN was not giving them the value they paid for.

He said, “The levy, which they imposed on imported used cars, is what is affecting car importation. What is causing the drop in importation of vehicles is the value in clearance. The VIN valuation is not giving us the value, which we are paying now.

“What made the value high is because of the levy imposed on older vehicles; it is the reason for the high cost of clearance of those vehicles. When we started the VIN valuation, we were paying normal duty with the percentage of the duty until the government now imposed levies on old vehicles, which now increased the prices.”

Though he admitted that the levy had been there before now, Alor, however, said it was not up to five per cent as against the 15 per cent the clearing agents were now being asked to pay.

He stated, “The levy has been there but it was below five per cent, but now, it is about 15 per cent. Any time we engage the Customs on the issue of value, they tell us that we requested for the VIN. And we are saying yes, we requested for the VIN, but the VIN was not well articulated the way we asked them to do it; they later imposed levies on it and the high levy is bringing the value up.

“Now, some vessels come with only 45 vehicles; some even come with less than that. The only time that they recorded a huge import of vehicles here was like two or three vessels that came with damaged vehicles. Following the introduction of the VIN and levy, vehicle importation has dropped drastically. There are times here at the PTML when nothing is happening and people just play around here. Some vehicles come through other terminals as containerised cargoes.”

A former Chairman of NAGAFF, PTML chapter, George Okafor, said the reduction in importation was more than 40 per cent.

Okafor stated, “It is no longer news that we have almost 61per cent reduction in importation of vehicles, it is very clear and open, it is an open fact and it is caused by policies. The VReg (Vehicle Registration System) is causing problems; as I am talking to you now, to get VReg is hard and without it you can’t access anything. So, all these are making things difficult for clearing of cargoes and vehicles out of the ports; it is not a hidden thing.

“We are in a situation where a ship will come and will deliver almost everything in Cotonou and the little one we have here will be difficult to clear.”

He said smaller vehicles that cost about N500,000 to clear now required over N1m, which was  responsible for the high cost of cars in the market.

Okafor added, “The VIN is still affecting us because the values of some of the vehicles are high. You know Nigerians rely so much on older vehicles because they are cheaper. Most rich Nigerians go for higher vehicles, you know in Nigeria it is either you belong to the higher class or the lower class. And those in the higher class buy vehicles from 2018 upwards and they can afford to clear them, but the lower class relies so much on older vehicles. And those older vehicles now are very expensive to clear; the vehicles we used to clear with N500,000 or N600,000 are now from N1m upwards.

“The cheapest vehicle like Toyota Corolla is now very expensive to clear. So, after calculating the cost of purchase, shipping and clearing here in Nigeria, you will find out that the car will be very expensive for someone in the middle class to buy. And the car will hang because you are paying the same thing with what a 2014 model of the same car is paying, so it will be difficult to buy.

“So, the people who are importing these cars are not even keen again to do the business; if they bring in the vehicles, a lot of people may not have the money to buy the cars. If you go to the PTML in Mile 2, there is almost no one there, because that is where all these small vehicles come through and TinCan is where the executive vehicles come through. So, you can see how it is affecting the whole thing.”

The PTML chapter Chairman of the National Council of Managing Directors of Licensed Customs Agents, Abayomi Duyile, said, “The VIN and the 30 per cent levy are the causes of the whole problem. You know when they introduced the VIN, it was part of what we were saying before that it was going to cause problems, but the Customs introduced it saying that it would make their job faster and all that. About a month after they introduced the VIN, they came with a 30 per cent National Automotive Council contribution, and we protested, they now removed it and changed it to a levy.”

“So with all these things, you find out that over N2m has been added to the prices of vehicles. And when (former President Olusegun) Obasanjo was there, they allowed vehicles of 15 years old to come in, but now the Customs, in their own wisdom, said such were old vehicles. Now, for example, a 2008 model car has now been classified along with a 2013 vehicle in terms of duty payment.

“These are the two major issues when you say 2005, 2006 and 2009 vehicle importers should pay the same duty as 2013, it is not done anywhere else in the world. So, you can imagine the people that the system has affected, some of their vehicles are still in the port as we speak; some have also abandoned their vehicles because already there is no point wasting money to clear a vehicle you can’t sell. The ones that have been cleared take time to sell.”

Meanwhile, car dealers have lamented a serious drop in patronage as cars now seem to be above the reach of ordinary Nigerians.

A car dealer at the popular Berger Automobile Market, Lagos, who gave his name as Chinonso Stainless, told Sunday LENTORLITENEWS that most of the dealers hardly record any customer in months as against what they used to see, especially when the Christmas season was approaching.

He said, “My brother, there is nothing happening here again because of the high duty rate; people who are bringing in cars are not many again. So, there are fewer cars in the market and the prices are very high; the turn up of buyers is very low. The patronage is not the way it used to be, people hardly buy cars now.

“A 2003 Toyota Corolla that used to sell for N2.5m is now N3.5m, while the 2010 model of the same car is N4.8m. So, we are pleading with the government to bring down the duty on cars because as soon as the duty comes down, the prices will definitely come down.”

The President, Association of Motor Dealers of Nigeria, Metch Nnadiekwe, did not take his calls as of the time of filing this report.