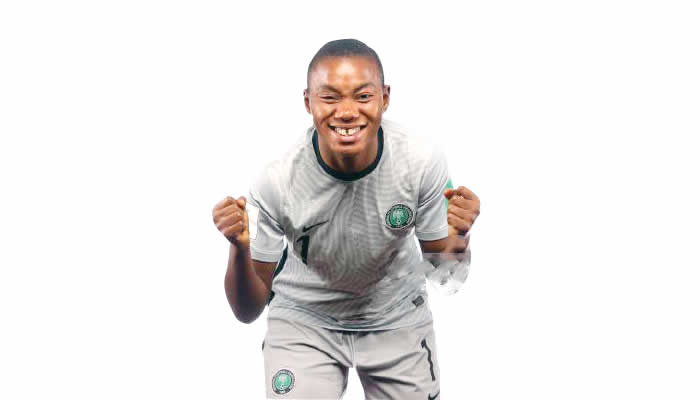 Falconets and Bayelsa Queens goalkeeper Omini Oyono, in this exclusive interview with ANTHONY NLEBEM, talks about how she started her football career, playing at the U-20 Women’s World Cup, her ordeal at the Istanbul airport and more

Welcome back from the U-20 Women’s World Cup. How would you describe the experience?

It’s a dream come true for me. With all the training I had growing up, my goal was always to play at the FIFA World Cup, and having that exposure now is a thing of joy.

You conceded three goals in four games at the World Cup in Costa Rica. Is it a performance you are proud of?

Honestly, I am not proud of my performance in Costa Rica. I feel I should have done better, especially the mistake I made against Canada; it hurts me so much.

How did you feel about keeping two clean sheets in the tournament?

That was my goal going into the tournament, we aimed to play in the final, but unfortunately that did not happen. I feel very bad.

You girls reportedly slept on the floor at the airport in Turkey after missing your flight. What was the experience like?

That was not a good experience, it was a shame for me to sleep on the floor at the airport, but we had no choice at that moment but to accept it.

We learnt that you had to pay $18 to have your bath at the airport, with some players unable to pay and couldn’t have their bath. Were you affected?

It was not an easy thing, from when we departed from Costa Rica to Colombia, then to Turkey. To take your bath, you had to pay $18. Let me tell you the truth, I did not have my bath and most of us did not have our bath for three days. None of us could afford to pay $18 for a shower, so we stayed for days without having our bath. But some of the officials, like the backroom staff, who could afford to pay the $18, had their bath.

Is it true you girls washed your kits yourselves in Costa Rica?

No, we did not wash our kits ourselves. We only dropped our kits off after training at the laundry, they will come and pick them up, wash them and return the kits to us.

What’s your next step as a footballer, after the U-20 Women’s Cup?

My dream is to play outside Nigeria and show the world my talents, but first I need to first improve on the areas I am lacking to become a better goalkeeper.

Some of your teammates were invited to the Super Falcons for the recent friendlies against the USWNT. How soon do you think you can break into the senior team, which has experienced keepers like Chiamaka Nnadozie and Tochukwu Oluehi?

I’m very happy for them to have been called up to the Super Falcons, they deserve it. I was expecting that because they did very well at the World Cup in Costa Rica. My prayer is for us to progress to the senior team. For me, I believe it’s a matter of time and grace, if others can break into the senior national team, I believe I can too.

What’s your impression of women’s football in Nigeria?

Female football is growing fast in Nigeria. Now you can play an away game and win, not like the usual home wins alone. Teams can now get away wins, which was very difficult in the past. The league is tough, with talented players. If you are not strong enough, you can’t play in the Nigerian league, because everybody wants to play.

Were you born with a silver spoon?

I was never born with a silver spoon; I was born and brought up in Ughelli in Delta State.

When did you start playing football?

I started as a secondary school player, just normal school football, nothing serious then. I had an appendix operation when I was in Delta State and my mum said I should go to Cross River, my state of origin, so I could recover fully. I went to Calabar, and that was how it started. A friend invited me to the stadium and introduced me to the coach of Pelican Feeders team. That was how I started playing football. From Calabar, I moved to Lagos with Local Queens, where I spent a season with the team. Then I joined Abia Angels; later I moved to Kogi where I played for Confluence Queens before joining Bayelsa Queens.

Most parents usually kick against their daughters playing football. Did your parents stop you?

My mum was not in support of me playing football because she doesn’t want me to look like a guy. But my dad was in full support, he loves football and knows many Nigerian coaches and that made it very easy for me.

Who was your role model footballer while growing up?

I was inspired by former England women’s goalkeeper, Hope Solo. The first day I watched her game, I said to myself I wanted to be like her. Then I was not taking my football career seriously, so I started watching her games. I was inspired by her. Interestingly, it was my dad that told me about her and urged me to watch her.

Why did you choose to be a goalkeeper?

I started playing football as a right-back, when I was with Pelican Feeders in Calabar. But one day, we went for training and my coach saw my reflexes in between the posts and converted me to a goalkeeper. He bought me hand gloves and jerseys and asked me to join the goalkeepers, and since then, I have been a goalkeeper.

What are your best and worst moments as a footballer?

My best moment was when I played against Cameroon at their home last year in one of the qualifiers for the World Cup, and that was top-notch for me. I was everywhere all through the game, coordinating my defence, and making saves. My worst moment was when I played against Edo Queens in 2020, when I conceded a very cheap goal, I don’t think I ever conceded a cheap goal like that in my career.

Which striker gave you the toughest time so far?

The list is much, but I will talk about two. I remember when I was in Kogi, there was Charity Ruben, who now plays in Israel. When she was with Bayelsa Queens and Ibom Angels, I was scared of her shooting. And there was also Joy Igbokiri, who now plays in France. When she was also in Bayelsa, she took advantage of any little space to score. They are fantastic strikers who will give keepers headache any day.

What are your ambitions as a footballer?

My biggest ambition is to make money, come back home and build a football academy in my state. My state is blessed with so many football talents, but many of them are wasting away, nobody to groom them up, they are just hoping to make it one day. If not for God, I would still be at home.