Why I wedded in canoe to defeat flood – Delta man 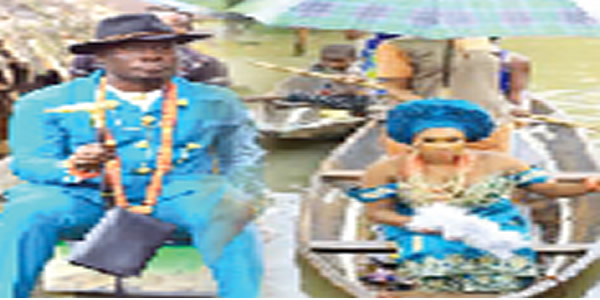 Can you tell us more about yourself?

I am a media practitioner and a researcher in the Niger Delta region. I currently work with the GbaramatuVoice Media Organisation as the managing editor. In the course of my duty as a journalist, through GbaramatuVoice, I have gone round almost all the creeks and towns in Delta, Bayelsa, Ondo and Edo states. One fact remains that the Ijaw region is blessed with an abundance of natural resources of oil and forests full of riches, but a region full of poverty. Yes, I am from Bobougbene, Ayakoromo, and Obotebe communities in the Burutu Local Government Area of Delta State.

You were seen having your wedding on canoes in the creeks of Burutu. What informed that decision?

First, my experience could be described as the first of its kind in this locality. Originally, my wife, Emily Tam Ekanpou, and I did not plan for it as such. We hoped that by the time we were set for the payment of the bride price, the ravaging flood would have receded. But unfortunately, the flood kept increasing, despite the fact that we had put in a lot of financial commitment to the wedding. So, we allowed nature to take its course because what is naturally designed cosmically cannot be reversed by man. Eventually, we got to my in-laws’ community where the water level was really life-threatening. There was no going back; we had to do it (have the wedding) as scheduled.

Before the payment, as Ijaw people, we are conscious of the long laid down tradition that if you are getting married to an Ijaw girl, no matter how far the village of the parents is, you have to go to the community where their daughter was born and was nurtured for the marriage. You have to go there to enable the people, the father and the kinsmen in the community to identify who is coming to marry their daughter. In doing that, the whole community becomes aware that a man’s daughter is married. Respect for her family’s roots and the entire community is paramount so that if any community person sees you anywhere, they will be able to accord you the honour as their in-law. The Ijaw people believe so much in this. So, we had no choice but to do what we believed was traditionally right.

How did you feel having your wedding amidst life-threatening flood? Were you not bothered that it was a dangerous adventure?

I will rather say that I was very excited and prepared for the ugly and unpleasant situation to go to do what has not been recorded   having a wedding on a canoe amid ravaging flood, and where there was no land to pay my wife’s bride price. When we (my family members and I) arrived from Warri, my wife was on a separate canoe, then the GbaramatuVoice team and I, led by my boss, the publisher, Mr Jacob Abai, were on another boat. The family was highly prepared to raise a small platform for us to pay the bride price. All the community people came with their canoes. My family and guests were all on canoes.

Were your family members comfortable with the arrangement?

Initially, my elder sisters were not happy that their brother was coming to fulfill the traditional rites of his beloved wife and they, the family, could not even honour him by dancing to rejoice with their wife. They were furious and came up with a  suggestion that things should be done in Warri. But I told my family members that the flood affected the whole of Burutu, and there was no internally displaced persons’ camp to move those in the village to the upland. Residents of Akparamogbene had to sleep in canoes as the flood was above the roof level. So, we had to respect my in-laws’ decision and go down to their community to pay the bride price. Yes, we got there and their drinks were served on canoes; the family accompanied their daughter on a canoe, and I danced on a canoe. It was a fantastic experience for me as the husband, a very lovely moment for me and my wife too.

How will you say the people in the riverine areas cope with flooding, such that they go about their lives?

Being an Ijaw man, we are riverine people. Flooding has been our major challenge all the time. We are coping with it and living with it. We have called on the government several times to help us in sand-filling our communities but there is no response. Flooding itself is aware that Ijaw people cope with it no matter the havoc it has caused in their homes. The flood is a natural and unusual disaster. Traditional marriage is a natural right of man. In my case, two natural elements met, so the superior natural plan (wedding) took the day. We conquered the flood and went ahead to perform our traditional marriage rites. I even wrote an article on the event. So, postponing it was like a mission impossible. You set your plans and conquer in the face of adversity. Because of the lack of government presence in our villages such as Bobougbene, Akparamogbene, Oyangbene, Eseimogbene, and others, women have gone through delivery on canoes during their fishing expeditions. What cannot happen in Ijaw areas does not exist. So, despite the flood, there was no postponement of my wedding and we were very happy people on that day, November 3, 2022.

I had earlier thought that with the flood going beyond expectation, there would be no place to dance. I was told by my wife’s family, the Ekanpou’s family, to come to pay the bride price with just five persons from my family.  However, before then, the whole of my community, Bobougbene, had planned to storm Akparamogbene community with local canoes and dance from home. But the flood refused to go. The community chairman and others called me to help them postpone the bride price payment because there would be no place for them to dance and rejoice with us, but I reluctantly refused.  So, we came from Warri; we were about 30 people on two speed boats – one conveying the publisher of GbaramatuVoice and the other conveying my family members and I. And my wife’s family, knowing that there was no land to stand on to pay the bride price, arranged for canoes and also set up a small platform which they warned was strictly for a few people so that it would not collapse. So, all other things were on canoes, and a few climbed the platform, paid for the items, and returned to their canoes.

Was your wife as comfortable as you were on a canoe?

My wife was not willing to dance on the canoe, but as for me who paid the almighty marital debt off my head, I was excited that I had conquered the most dreaded flood in the history of Nigeria, as an internally displaced person.

What were the other noticeable challenges you faced on the day you got married?

To God be the glory. The celebration went well even though the original plans were modified. The risk on a boat for bride price, payment was an unusual phenomenon. It was fun and interesting to me but a very challenging situation, not comfortable but we adapted and did all we could to the best of our ability. The list of items given to me by the bride’s family was followed accordingly. However, we couldn’t dance well as Ijaw people in the Niger Delta region. When you pay your wife’s bride price, good music is played for you to dance with your wife, but those things were not there as part of the traditional marriage. The flood was a great challenge to us all. Although the community people who were there were in a joyful mood, I could see the pain caused by the flood on their faces.

It is painful to note that the government has been nonchalant about the Ijaw people living in the coastal areas; whether the people are dying or not, it is never their (the government’s) business, except during the election season. That is the only period when they know there are people in the villages, and that they need to get their votes.

In the Burutu Local Government Area, for instance, there are no IDP camps to cater for the flood-ravaged people. The children, aged men and women were left on tree tops and canoes to survive the devastating flood. That is a big challenge of the century. The Delta State Government should be proactive in dealing with the riverine people. The challenges are too many – from drinking water to electricity, health care, good schools, and other social amenities. There is no road network for easy flow of the market.  It is too bad. We have been experiencing worse times as coastal people but this one (flooding) is the worst as houses are collapsing and there is no support after the flood.