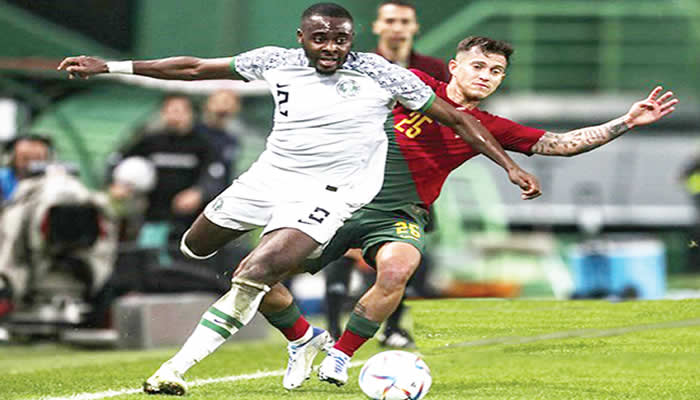 A first-half brace from Bruno Fernandes and two quick goals in the second half from Goncalo Ramos and Joao Mario saw Nigeria fall 4-0 to World Cup-bound Portugal in an international friendly at the Estadio Jose Alvalade in Lisbon, Portugal, on Thursday, The LENTORLITENEWS reports.

The Seleção das Quinas, as the Portuguese national team are called, were without Cristiano Ronaldo but still had enough firepower to humiliate the Super Eagles in front of the 50,000 crowds before heading off to Qatar for the World Cup which kicks off on Sunday.

Portugal got the game underway and immediately began to show their superiority as they dictated the tempo of the game.

Atletico Madrid’s Joao Felix should have given the Europeans the lead in the opening five minutes following a fine pass from Manchester United Bruno Fernandes but the forward miscued and was unable to connect with the ball giving the Eagles’ defense the opportunity to clear the ball.

Two minutes after, Fernandes almost got the goal for Portugal but his shot missed the target by a few inches despite having Francis Uzoho rooted to a spot.

A minute later, Portugal’s pressure paid off as the Manchester United midfielder opened the scoreline to give the 2016 Euro champions the lead just nine minutes into the encounter.

Diogo Dalot made a fine run down the right flank and released a pass to his club teammate who coolly slots the ball into an empty net.

Nigeria began to get into the game having gone behind less than 10 minutes into the encounter. Ajax’s Calvin Bassey dribbled past three defenders but the chance went to waste with no teammate to give the final pass to.

Portugal continued to torment the Eagles’ defense and almost got the second goal of the night after just 14 minutes with Uzoho beaten by a curly shot from Otavio.

Felix thought he had gotten his first and Portugal’s second goal following a fine shot that narrowly missed the target.

Nigeria’s best chance of the game came in the 24th minute following a fine solo run by Joe Aribo, who sped down the midfield and released a pass to Alex Iwobi but the Everton player’s final pass was blocked by Ruben Dias for Nigeria’s first corner of the match.

The three-time African champions were almost punished from the resulting corner as Felix was released for a counter-attack but Bright Osayi-Samuel timely intervention forced the 23-year-old shot to corner.

Portugal continued to pile more pressure on Jose Peseiro’s side and were rewarded after Osayi-Samuel was adjudged to have handled the ball in the penalty with Cyprus referee, Chrysovalantis Theodorou, pointing to the penalty spot.

Fernandes converted from the spot sending Uzoho the wrong way to make it two goals for Portugal.

The midfielder almost got his hat trick but could not send the ball into an empty net having rounded the Nigerian goalkeeper.

Portugal took a healthy goal advantage into the break as Theodorou brought the first half to a close.

As the second half was about to commence, Peseiro brought on the duo Samuel Chukwueze and Frank Onyeka for Ademola Lookman and Wilfred Ndidi respectively.

Fernandes would not have the opportunity to score his hat trick as coach Fernando Santos replaced him for Vitinha while Dias and Bernardo Silva were also replaced with Raphael Guerreiro and Joao Mario.

The Eagles’ performance in the second half improved compared to their poor display in the first 45 minutes as they were able to string some passes together and control the game better.

After an improved performance in the second half, Nigeria had the opportunity to reduce the deficit after Osayi-Samuel was brought down in the box for a penalty but Emmanuel Dennis failed to score from the spot as his shot was saved by Rui Patricio.

The Eagles were made to pay for their missed opportunity and they conceded two goals in the space of two minutes as substitutes Ramos and Ramio scored to add to Nigeria’s friendly misery.

The result means Nigeria are yet to win in any of their last 14 friendlies.